In the past year or so, Azure released a hosted version of MySQL Community to its catalog of hosted database offerings. To truly understand this, let's start with a high-level comparison of the two offerings before going into detail. 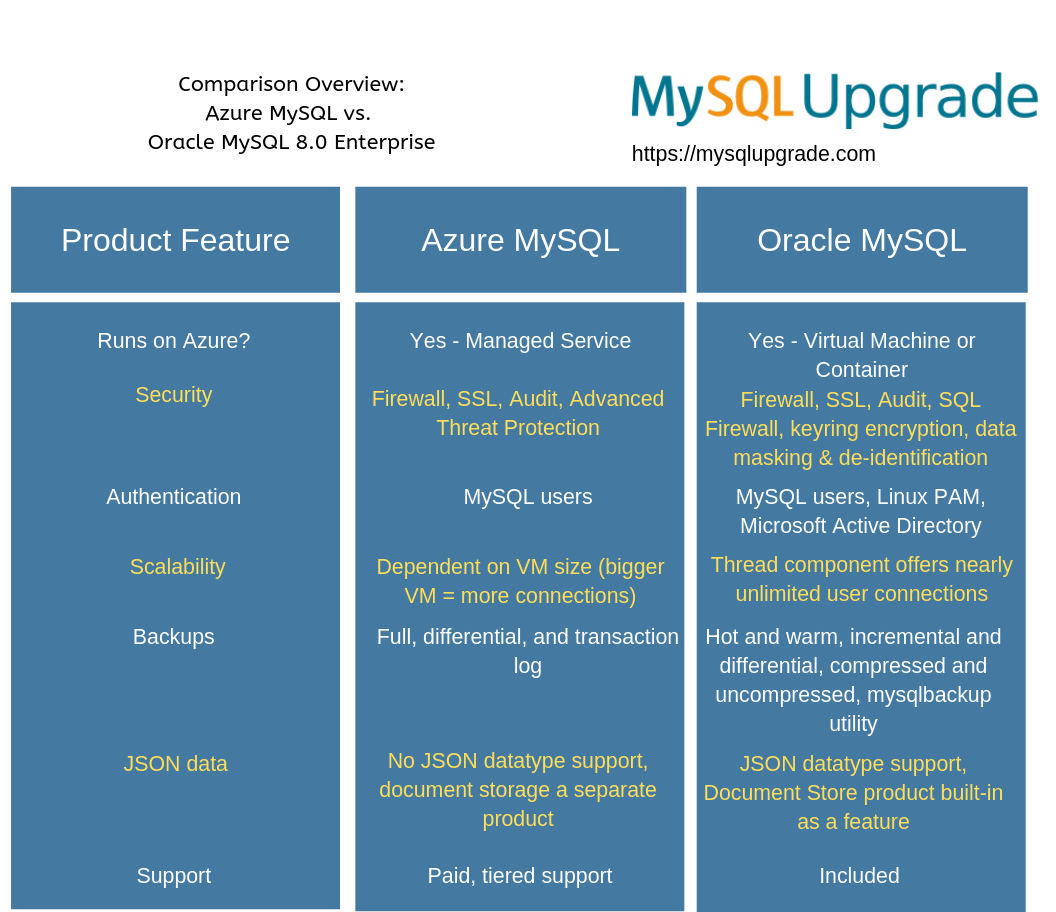 On the other hand, Microsoft's offering is the open-source Community edition of MySQL, which is freely downloaded to the general public. It's essentially a co-opt of an open-source product by a hosting company - not an uncommon practice in today's cloud ecosystem (or before that, even), but as we've detailed in this website, there are some pretty stark feature gaps between the product editions, gaps that Microsoft does little to nothing to fill.

Microsoft gives you the options you would expect from a hosting company - SSL connectivity, a network firewall, and their Advanced Threat Protection which is currently under public preview (not GA). This product monitors for events such as connection events from unusual locations, brute force attacks, and access from unusual apps or users, and reports these events to the Azure Security Center for further remediation by whoever is in charge of such things.

In a MySQL Enterprise installation, you get all of these (except the Azure Security Center integration) and other features explained here such as:

Let's start with the important one: Azure MySQL does not support Active Directory authentication. You only get this feature through MySQL 8.0 Enterprise, which also supports Linux PAM as well as MySQL users, which is the only Azure MySQL authentication option supported.

If you're looking to scale out your number of connections to your Azure Hosted MySQL instance, it's going to be entirely dependent on your machine hardware. It also uses a gateway system of public IPs (based on the data center you're using) that routes your external connections to your hosted environment.

In MySQL Enterprise, you get the thread pool component, which does a fantastic job of giving your environment sustained, stable scalability well beyond what's supported in Azure MySQL's Community Edition platform.

Azure MySQL supports full, differential and transaction log backups that are encrypted and have a default retention period of seven days. What it lacks in enterprise-level options, Azure does a good job of making sure your system is backed up well and often.

The one area where Oracle wins hands-down is with Oracle Lifetime Support which comes at no additional cost to MySQL Enterprise licensees. For the cost of the Enterprise license, you not only get all of the feature differences listed above, but you also get hands-on, consultative support with any issue you may face with the MySQL database platform.

Microsoft does not offer any kind of exclusive support to their hosted MySQL product; instead, you have to purchase one of their support plans. To get the equivalent support for Azure MySQL as you get with MySQL Enterprise, you have to purchase their Premier Support option, which does not list a price but can easily run into the tens or hundreds of thousands of dollars for a contract. To be fair, it will cover the Azure platform in its entirety, including Azure MySQL, so it's really up to you, the enterprise customer, as to what you determine to be the better value there.

The other thing to keep in mind is that Enterprise customers get bug fixes sooner than Community Edition members do, if only by virtue of being further up the support chain than those not paying for the platform.

From the Resource Limitations page in the Azure MySQL documentation, there are some other limits to keep in mind, including (but not limited to):

But wait, there's more - There's a list of known issue and limitations when migrating into Azure MySQL, which include the following:

Other limitations around data types and index nuances are in there as well, so make sure you read that document if you ever considered migrating into Azure MySQL.

If you're considering deploying MySQL 8.0 Enterprise into Azure or any other cloud provider, contact us first so we can discuss your options. If you're looking for a managed service provider (you know, so you don't have to manage all those pesky upgrades), give us a chance to earn your business, or at least make sure you have all the licensing you need.